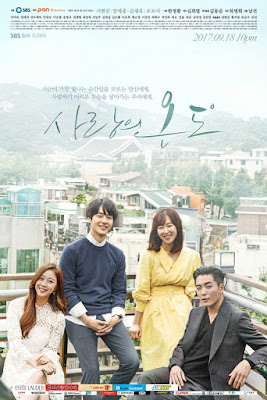 From the same writer of High Society and Doctors of which I both watched.. (Adding Can We Get Married) I think this drama is not far off from her previous works. She tackled mostly on the emotional struggles of the main leads and gives enough justification for antagonist / second leads to be somehow understood by viewers. Although the writer goes on to show how far the second leads or antagonist can go as far as making situations intriguingly frustrating, yet in the end she wants a happy ending for all characters and reconcillations are possible for all.

Temperature of Love has given viewers all the romantic feels everyone longs for in a relationship. Jung Sun is almost a perfect boyfriend and if Hyun Soo makes viewers disappointed and feels frustrating she still makes it okay as a girlfriend who despite difficult situations and wavering managed to make it through and be firm in love. I think her mistake in letting him go once was a burden she faced everyday that when finally given a chance the longing to make it perfect this time makes her cling to a relationship that wants to protect it. Even unknowingly suffocates Jung Sun with wanting him to completely reassure her of his love. With different childhood background there will certainly be different emotions involved and how one grew up will be how one tackles emotions. And i understood Jung Sun on how he can't easily opens up about his past. But of course all ends well as the writer wants a happy ending for her otp.

As for CEO Park... As much as I felt irked by his character I think was unnecessary, once again the writer showed how the third party in this story truly feels and what would he have done if she is in his shoes knowing he is likely a man who pursues until the end and never gives up easily hence him being a successful businessman. So I give writernim an applause even though I really felt CEO Park was being an a** for not backing down and being a gentleman and a good friend who took loss in a good way. Making him more human and close to reality is what makes his character loveable and annoyingly irritating at the same time. Glad he knew he started a gap and almost break what is precious to the people he thinks he treasure the most as family and took a step back. By doing so he invisibly somehow helped the two to find their own way back in each other's arms.

Surprisingly I liked Hong Ah and her childish yet strong personality. Her character showed development and in the process she matured in handling romance. She gave some of the best scenes in the drama with her continuous tantrums that won her her fight against possible injustice that she could suffer as a beginner in the writer's world of drama. While she makes it impossible for the director and CEO Park to put her in her place she showed also how she will stand firm in her rights not to be manipulated. Which was totally opposite of Hyun Soo who is never feisty as her. I also like how time goes by and finally she realized her love towards a friend turned into romantic love. With Won Joon I also like that the writer showed how love can never be replaced by forced love by turning to someone else when everything revolves to that one particular person...aka Hong Ah.

I also find Jung Sun's mom refreshingly likeable as a characater in kdrama. Her insecurities she makes up for clinging to men who entered her life and at the same time childishly burden her son financially. Without knowing how to live her own life indenpendent of men she selfishly makes it hard for her son to understand her pains and her suffering as a mother and as a wife who settled early in marriage with the thought all will be like in a fairy tale. But reality hit her hard literaly! I love how Jung Sun despite having broken family stood by his mom against his father. It was after all adult's problem. But of course violence can not be excused whatever reasons behind it. Well the writer is a possitive person and decided to make this family forgive and somehow forget pains of the past. Reconcillations are not fully dealt with but acceptance of who they are and what each meant towards the other makes them still a family. They have to move on to start afresh. Just like his mom who finally realized what she wants in her life and started a business. Now she has her own little world without necessarily having a man in her life but still find happiness. It was all a matter of trusting and believing in herself. I love how writernim showed this side of the story where one can start again despite numerous failures in life. Sometimes it is not really romance that can fulfill one's life. There are things more to romance.😜

As for the other couple in the drama who are like cat and mouse (tom&jerry) there is that kind of romance in real life where two people start off in the same vibe. Like everything one does irritates the other and vice versa. Like teasing to the point of annoyance makes one happy and the other crazy mad. But in the end it is just the process of how romance builds up between them. Like they finally realized that they are exactly the opposite of each other.. But at the same time compliments each other in an ironic way. Many can relate to these two on how their "can't tolerate each other" can surprisingly be a blossoming romance.😂

Hmmm..i think so far I have covered all the important things this drama has showed to viewers. Happy and sad moments both make the drama a nice one. Something that will make a viewer remembers the story of each character. Most of all Temperature of Love shows different degree of love and romance. We felt how it is to be in love again.