I decided to make some screen caps of Jung So Min from the movie Twenty. I thought she would have many scenes but most are in the latter part of the story. All three boys had a crush on her but it was Kim Woo Bin's character that became her boyfriend. The relationship was not serious though. He had a relationship with another woman. An intimate one.

I have a favorite scene where Kim Woo Bin saw her and Kang Ha Neul holding hands. It was awkward. They are friends after all. It was a good scene, though.

Made some gif. too.

Please link back to this page or give credit when taking out photos or gif.

The Gangsters and the Boys

Who would have thought that Cho Rim would be able to get away from Chef Kwon without being recognized even in close quarters? I bet everyone  has forgotten that he has Prosopagnosia aka facial blindness.

The writer is brilliant in making our villain having this defect or disorder. At least this is Chef Kwon's weakness that can be taken advantage by Cho Rim. She had to stop making noise or vocal sounds so as not to make Chef Kwon identify the sounds coming from her that can trigger his memory bank to know who she is. Good thing Moo Gak already arrived at his place and cut the electric power first, making Cho Rim use her eyes to see scent of Chef Kwon and also of Moo Gak. Even in the dark she was able to get out of the house while Chef Kwon was trying to move in the darkness.

Outside, Moo Gak hit Chef Kwon's head at the back. The chef was unconscious. The desire to pull the trigger in his hands [Moo Gak] was strong but he controlled himself with the help of Cho Rim who pleaded to him not to do it. Inside, Cho Rim was calling her father and even Moo Gak tried to find Oh Jae Pyo but it seemed he was no inside. Cho Rim fainted maybe from shock. Moo Gak  picked her up and put her inside the car. The two detectives arrived just as Moo Gak were ready to go.

The incident became useless for Chef Kwon. He never knew who was the daughter and had to let Oh Jae Pyo go with the detectives just outside his house waiting. Oh Jae Pyo seemed to have woken up in Chef Kwon's room not realizing he was drugged.

Cho Rim was admitted at the hospital. She woke up after a while. Moo Gak was there with her. She was fine. They talked. He told her he knew her reasons of breaking up with him. Still Cho Rim is not changing her mind.

Next morning, her father arrived. Oh Jae Pyo learned about what happened. He was advised not to be with Cho Rim so that Chef Kwon would not find out she is the witness. Cho Rim wanted to go home. Moo Gak had to let her be but decided to follow silently. The house was in a mess. Someone had entered and made a ruckus inside. Nothing was amiss except for her photo. It is clear that Chef Kwon got the photo and is intending to find her. Cho Rim had no choice but to stay in Moo Gak's place. He told her he has a friend who lives nearby. But it was a lie. He stayed inside his car the whole night watching outside.

Because of the circumstances, Moo Gak and Cho Rim somehow had gotten back together. The atmosphere between them inside his place was awkward for Cho Rim. She realized he was sleeping in his car and decided to let him come inside and sleep...at the couch. She is sleeping in his bed. It was like they are newly weds. An ahjumma from the building they rode with inside the elevator thought they were newly wed couple. Cho Rim started to say they are not but Moo Gak cheekily thanked the ahjumma. lol!

Cho Rim decided to stay close to Chef Kwon. She knew he did not recognized her. It is an advantage to her and to the team. She told them she will help catch Kwon. Devices were provided for her for her security and easy access to Moo Gak and the team. There are ear piece and a book with camera that she will have to sneak in inside the library to record Chef Kwon's movement and to know where he put her photo. There is also necklace in case she was caught and can not yell for help. She just have to press the pendant and it will make a loud sound that will alert the team. A car would be on standby near the house and monitor her and what's happening inside.

Can Chef Kwon be fooled more than twice?

First Chef Kwon believed Cho Rim when he caught her reading something inside the library. It was doctor Chun's letter in the previous episode. Then opening scene in this episode, she was able to fool him again when he did not recognize her. Can she get away again if something went wrong while planting the camera and finding the photo?

Going inside the library while Chef Kwon was recording a 5 minute cooking show was nerve wracking. She was able to sneak inside without notice but unluckily the cooking finished under 5 minutes. The director decided to film her which made Chef Kwon realized she was nowhere nearby. They decided to find her. Chef Kwon was looking suspicious as he went towards the elevator. It opened with her inside, skirt halfway showing a part of her thighs, a  very nice alibi, telling him about her stockings. Well, fortunately Chef Kwon believed her.

What they did not know, Cho Rim's photo in Chef Kwon's possession has a mark at the back. While trying to recognize the photo, he drew a circle at the right bottom corner at the back of the photo. I think it was not really a mark but it happened that way.

The team in the bureau decided to photoshop a copy of the photo of Cho Rim just like what CHef Kwon has. They realized he would hire someone to find the woman in the photo. Cho Rim had to exchange the real one from the fake one which is inside Chef Kwon's wallet, unfortunately. While he was busy cooking she was able to get his wallet inside his jacket he laid in a counter top at the corner of the kitchen. She returned the wallet after sometime without being caught. Seriously! My heart was beating fast while watching Cho Rim pulling the stunt without being noticed. And he was just there, if he turned his head he would see her!

Okay, again, she was lucky. After her work she told Chef Kwon that she left her wallet in his house when she used the comfort room yesterday. He was on  his way to meet the man who will find Eun Seol for him. He gave her his key and told her to go ahead. But then Cho Rim left her mobile phone at the restaurant while going to Chef Kwon's house. They all thought he will not be back for awhile. On his way to the meeting area, the man called him asking if the job is related to  a crime. There were cops everywhere. Chef Kwon was alerted of this and decided to turn around and go home.

Inside the library he kept on thinking how the police knew about his plans. He looked around for something knowing there must be inside that library. He then focused on a book and found out it has a camera. Moo Gak who was watching via the monitor at the car was startled to see Chef Kwon staring at the camera earnestly and seemed pissed off. He even let him know that he found out about the camera. Just then Moo Gak remembered Cho Rim was on her way to the house. He tried calling her but could not get through her. 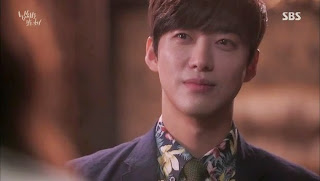 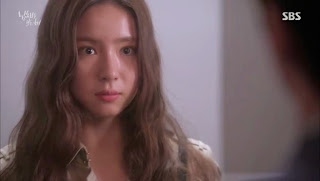 Another nail biting scene is coming! I bet the writer is having a fun time knowing the viewers are once again treated to a heart pounding moment. Always cliff hanging episode ending.

Chef Kwon was on his way towards the elevator just as Cho Rim who had gotten back her wallet was on her way down to the library to get the book with the camera. Chef Kwon was about to push the button when he saw someone is riding the elevator. He waited like a predator. 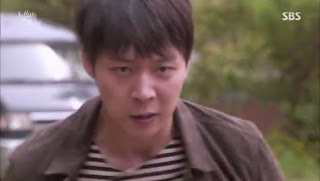 Will Chef Kwon be fooled again with her alibi or pretend that he believes her? This is going to be much disturbing if Chef Kwon has already found out about Cho Rim with his instinct and continue to pretend he has not yet known about her. What will Moo Gak do? He and Chef Kwon already reached an understanding about him being the killer but without clear proof. How will Moo Gak protect Cho Rim or rescue her in that kind of situation?

The story continues to scare me with Chef Kwon's creepy ways.