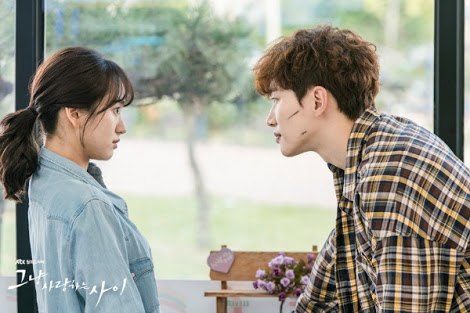 After watching this week's episodes I can say that this drama is promising. It is one of those dramas that shows emotional struggles and as an outsider (viewer) you keep watching to know more. Junho and Won Jin A are both good in portraying their characters. Their chemistry is also nice. If you have watched Secret (Love) you will get the same vibe in this drama.

Four characters 👉perhaps getting tangled in romance. Like she loves him👉he likes her👉she loves another guy👉👈he loves her back.😛

Right now I can't wait for episodes 3&4 already. The romance part between lead characters is slowly getting interesting. 😻

Two souls who experienced the same tragedy. Two souls who are still trying to move forward from painful and scary memories. The emotional scars they got from the past changed them. Will they ever heal from the trauma?

I think the drama left a mixed impression on viewers as a whole. Some like it very much while I can't exactly figure out if the story as a whole is something worth watching again. I have already wrote that the storyline was kind of messy and there are lots of twists that I think is unecessary. There were too many incidents that happened surrounding the backstory of the main leads. Two main events in the past were used as the center point of the story while a grim reaper happened to enter a human body to look for his runaway partner. The story was a tough one to follow from the beginning until some revelations tied up loose ends. Still..most of the twists were random as the romance between Black and Ha Ram blossomed. Anyway...it was later revealed that Joon was 444 who entered Moo Gang's body where his heart now resides. Yes..the mother was the one who killed Joon in order to save Moo Gang. In the end there is no Moo Gang ( he died when he was shot at the mall) coz Joon totally exists in his body as 444.

I just wonder why the story did not show Moo Gang died in the end when 444 aka Joon left the body to receive his punishment. The story only showed that his existence ( was it Joon or Moo Gang) vanished in everyone's memory as if he did not exist. Let us not forget that Ha Ram did not realized that Moo Gang whom she loves was actually Joon when he finally learned the truth. So..who was it that Ha Ram and the others forget or erased from their memory?

One thing I am not comfortable with in kdramas is how death always seems to be the answer or easy way out when things get harder and life seems miserable. Suicide is like the answer when there seems to be no hope. Almost every culprit or villain that the story had revealed as twist in the drama ended dying. They were not punished for the evil deeds that they have committed. Only Oh Man Ho who was later on revealed manipulated funds and documents of the company got imprisoned and seems to be the only one paying for his crime which ironically is the least evil of those other culprits. With so many twists in the latter episodes Man Ho was thought of as the culprit for most part of the story. I wonder why the writer did not pursue this path but created other villains or masterminds.

The ending was a consolation for shippers coz a grim reaper can not be with a human especially with Ha Ram who will know and see that Moo Gang has black shadow inside him if the writer tried to make the love story as is. Oh..and it was Joon after all. Ah...this is really confusing in a way so glad Ha Ram was spared of knowing who she loved in the end.😂😂😂

Time jump reminded me of Titanic. Rose lived her life when Jack died. Like Ha Ram...she lived her life as a wife to a nameless and faceless husband, had children I supposed and grandchildren. Only Leo aka another grim reaper knew about what happened to 444 aka Joon as he was instructed to remain by Ha Ram's side as a friend and protector in place of Joon and to live as a human for a long time.

When finally she died....Joon was there to fetch her soul. I wish she knew it was Joon. Or is that unecessary?

Yes..seems like a happily ever after in the next life for Ha Ram and Black.
Ending was kind of poignant...last scene I could say beautiful if not original.