Both have feelings for each other but why is it so hard for them to love and be happy? 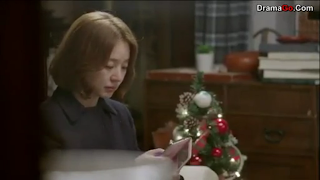 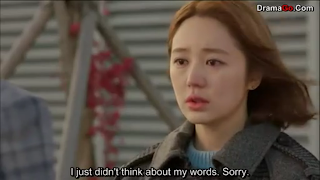 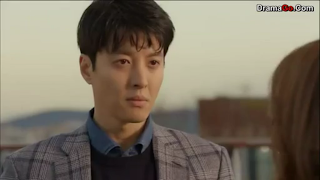 Random thoughts here with some recaps...

In episode 11 Kim Shin voiced out his confession in front of his colleagues towards Mi Rae. Another attempt to build the romance and another anticipation from us viewers. But of course my expectation was once again doused with cold water when the confession turned into a ruckus, a joke which made Mi Rae felt bad. I think PD Na's butting in to downplay the confession made it worse as the other males in the team joined in as they also confess. Se Joo and Yoo Kyung just looked on. Kim Shin, however he salvaged the moment was lost. I think this is a definite turn down by Mi Rae's oppa. Even if Kim Shin followed Mi Rae and explained, she already misunderstood and he could not save his sincerity.

In this episode, the ahjumma talked to her oppa. She told him the rest of the story behind her comeback and motive to turn around her future. PD Na also received the copy of the DNA test where it stated the 99.9 % possibility of the ahjumma being the same Mi Rae, his sister. I think with her side of the story, he will be forced to believe her and make his decision. After all, the story has been telling about the role of PD Na who is against now and then towards MR and KS relation ship. It was revealed that MR/ahjumma did not see him for 20 years after they married. A picture of how strained their relationship as siblings.

In this episode, MR continued her undercover story for her debut as a writer. She was working inside the place where fake liquor was being manufactured. Even if Se Joo was her back up, he stayed outside. Meanwhile, in his own concern for MR, KS went to the place and met a waiter working there. The man knew who he was. KS told him to look after Jung Hee [MR] as a favor and gave him his number in case something came up.

KS in his own way still protects MR even without her knowledge which shows how sincere his feelings are for her. I just felt sad that he was always misunderstood. Regarding SJ, I know that his edge over KS is his friendship with MR. But of course, he knew where her heart lies but still not backing up. He had gone too far, his emotions too involved now to just give up. Personally, I do like him, too but maybe because I know MR follows what her heart is saying, so I feel her and why I want KS to be the one.

When her undercover was revealed, she was tied inside the place, all evidence seemed to be gone and no one to rescue her. Thankfully, the man who KS asked to look for her saw her being hostaged and he called KS, while the ahjumma who helped MR went inside the manufacturing place called SJ to let him know something bad happened.

Both man, KS and SJ did what they have to. SJ used his influence as a wealthy grandson and gather his men while KS called the team and the police to the place. All ends well for MR. SJ was there to meet her outside and asked her about her condition. But her eyes were searching for someone, who was then standing distantly talking to an officer. When he walked away, he glanced but that's all, to her disappointment which was not amiss to SJ.

Because PD Na knew what happened then to ahjumma and KS, his stand for MR to avoid KS stays. He was adamant to stop her from meeting KS and that he will oust her in the house if she persisted.

In the end, with writer Bae and her insistence, she wrote the narration and her name debuted as the writer of the Pandora's Box segment. Mi Rae regardless of her nature from ahjumma's past was more sure of what she wants to be, what she know she must do and that she is her own person. I think ahjumma's interference is an eye opener to MR  hence her decisions that followed are much thought out and more firm.

Episode 12 opened with the ahjumma and Kim Shin talking. Finally, she revealed what happened and what will happen in the coming days for KS. PD Na arranged a meeting with these two and left the DNA result to KS. He was somewhat flabbergasted, surprised but I think he did believe the ahjumma. The reasons why she came back was their son died. Well, I was wrong in my first assumption in the earlier episodes about who will die. It was their son who was at that time let go of her hands as the two of them were arguing. Both knew their son was walking away but was just too immersed in their arguments. Too late to rescue him.

I was wondering why she kept on telling him he was to blame even from  the beginning. I gather that they were happy at the start of their marriage and when he was fired out from work, just as how he was stubborn, he stayed at home not working. PD Na nagged him to work whatever comes but it was MR who insisted he shouldn't do MC in the neighborhood, maybe not befitting his image and caliber. I think admitting this was also MR/ahjumma's fault then. She should have supported him and guide him back then. I think his biggest mistake in that marriage was feeding his big ego and MR hadn't the courage to make him realize what was best for them. The arrival of their son was a happy moment for them even though he was jobless. So in this circumstances, I think they still understood one another and love prevailed.

The arguments kept coming and I realized that maybe MR/ahjumma knew in her heart that it is not only KS who failed and was at fault here, but as much as herself. She seemed to be more concern for her husband, than her son, that's why the accident happened. She was so guilty of what she was that all she could think of was changed her past. But KS was right when he asked her she could have come back on that moment to save the child but she chose instead to come back far down. What was the reason then?

The episode showed PD Na in a hospital and seems to have cancer. Did she perhaps abandon him during those times MR/ahjumma fell in love with KS? The revelations are bits and pieces but somehow they put a picture of what could have changed the ahjumma's mind.

In this episode SJ was trying to wait for MR. He told her until she and KS became a couple, he will wait. I felt sad for Yoo Kyung. She tried to live and act normal in front of SJ. I don't mind when she met with Miranda. It was not a malicious intent for me but maybe her concern for the truth. But of course Miranda told her up front she won't be the one even if MR is not for SJ. I know how to be rejected and that's how she felt that time. As the only female in her team, her sunbaes called her to join them and even though she didin't want to she felt helpless not to go and meet them. She was about to turn around, maybe realizing she should stop being obedient hoobae but SJ appeared at the place mistaking her presence as one who is searching for wealthy men. She was hurt so she went ahead and join the men.

Afterwards, she cried for she knew SJ looked at her as though she was a shallow woman. She told him she won't care anymore. Just as KS decided to end it with MR.

Even if MR was the one who always called him, even making reservations for them on Christmas eve, KS did not show interest. He was on leave for the moment. The painful rejection came on that night MR was anticipating. KS deliberately confirmed his date with her but when she arrived at the place, he was already there with someone else. He didn't even answered her calls.

Unveiling what had happened in the future which was the past of the ahjumma affected KS actions now. However he loves MR, he knew he can't put her in the same painful future of what their marriage will become. He denied himself the love he could have shared with MR which is very selfless if considered. He is ready to move forward disregarding his own feelings and wants for MR's  sake. And I think Kim Shin finally grown and developed to be a good man.

There's a good thing and a bad thing in ahjumma's presence now. She has helped herself and Shin to be a better person. To know what they are capable of regarding love and loving someone.

Four more episodes and I hope whatever is left of the secrets form ahjumma's past, which is MR's future, they will all be resolve and in the end find the happiness which was really the ahjumma's goal in her coming back.

some caps of our main leads... 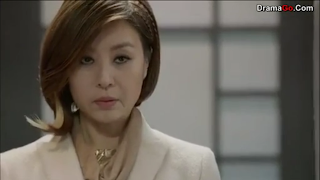 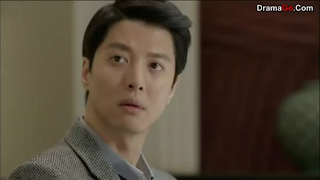 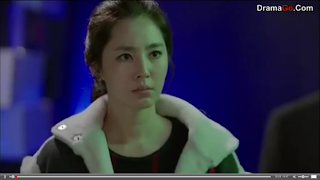 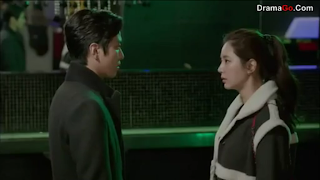