Cheese In The Trap is on hiatus this week for the lunar year celebration. It's not surprising if viewers [like me] who are looking forward to episodes 11 and 12 are trying to be patient just to make it next week. Actually there are still other dramas in my list but somehow, Cheese In The Trap really caught me like I am actually trapped with unexplained fixation for this cute drama. Guess the drama's charm is really something I can't get enough of. Since the preview of the on coming scenes are something to look forward to, I'm trying to be patient.

I am fascinated with the character of Yoo Jung, sunbae.

Well, it's cute how Seol refers to him as sunbae even if they are already in a relationship. I think it comes with how it is to be Korean. Every time Seol calls him sunbae, it sounded like her own brand of endearment to him the way she speaks the word. The hesitation or the surprise and awkwardness in her tone makes her adorable and cute at the same time.

I think it is the complex personality of Yoo Jung which makes her uncomfortable regardless of being his girlfriend. Even I as a viewer is sometimes perplexed at Yoo Jung for he is not your ordinary boy-next-door eye candy with his complicated aura. It's not surprising if Seol goes back and forth in doubting him every time nuances like Young Gon put hard on twisting words or show facts like text messages that are already in the past.

I think misunderstanding what happened before should not be of importance now. But since those messages were a part of Seol's miserable year when Young Gon stalked her, it became a problem that caught up in the present times. There is no denying that Yoo Jung probably misunderstand her when she gave a drink to Young Gon after he hit Yoo Jung while making a fuss at the basketball court. It was true that during that time, she and Yoo Jung were not in good terms as hoobae/sunbae. It could be that Yoo Jung felt annoyed perhaps a bit jealous considering she was not friendly with him after the incident at the party where she found him smirking as he found her doing the same thing. It was true that Yoo Jung texted Young Gon but the other texts messages were not his anymore but of In Ha who were then being a brat while Yoo Jung let her be.

But when Seol asked him now if he really sent those messages, he did not make excuses and just admitted it was him. He did not make it clear which text messages he sent and how the circumstances was played that time. For Yoo Jung, it is more easy to just be honest and not explain, thinking it was the best thing to do and that Seol would understand. Well, she was hurt and betrayed even though it happened way before they became campus couple. 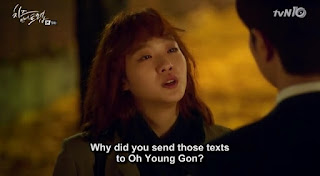 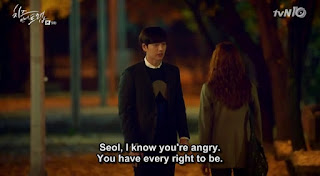 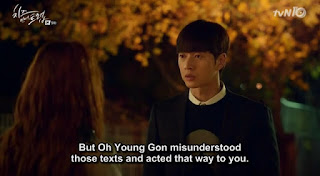 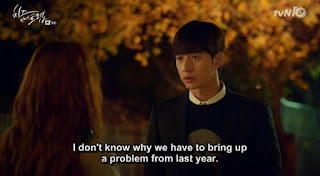 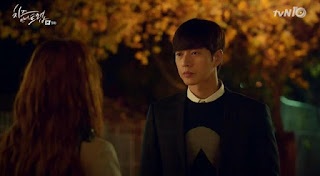 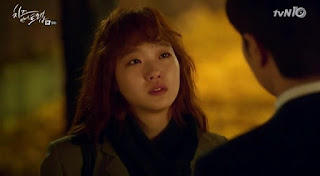 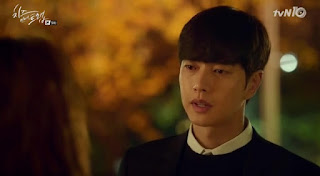 Yoo Jung's way of tackling life and things is simple. It's either black or white. But he did not realize that he is not that easy to read, to understand because he appears vague and shady which makes it too complex for others to see.

One thing Yoo Jung is good at is creating opportunity.

He finds ways to get back at people just like Son Min Soo. He saw how she transformed herself to be like Seol, to imitate and cause misunderstanding, even stealing the doll he gave to Seol and not giving it back. He knew Seol was being a pushover about it, not fighting back and letting Min Soo get away with her copying. He knew it is getting tiresome. Getting Seol's brother to appear in front of Min Soo and the rest of the students who thought Joon is Min Soo's boyfriend [she did save his face in her phone and everyone mistook him as her boyfriend and she just went along] was an opportunity that enlighten everyone. The fight between Min Soo and Seol was inevitable. It has to happen to stop Min Soo from being foolish anymore. Time to get back to reality.

It was hard for Seol, dealing with all these and Yoo Jung's interference once again. She realized he is that kind of person. He will do the right thing even if his ways are shady, a bit calculating. It's the feeling that makes Seol even more awkward and uncomfortable with him. She knew he is a good person but something stops her from totally trusting him. That's when Yoo Jung gave her space. To let her come to him instead of crowding her when he knows she needs time to understand him.

I do have a favorite scene which really stayed with me even after it ended.

One of the scenes that made my heart jolt was when Yoo Jung suddenly gave Seol a back hug. It was after she learned he sent those text messages to Young Gon. They had a fight. At the school next day, she went to drink coffee and he followed her but walked passed her. She then went to the rest room and when she came out he was still standing there by the stairway, like waiting for her. She went to walk passed him and that was when he suddenly held her hand and turned around for a back hug. I think the back hug said it all how sorry he was, how he missed her, how he really likes her and hope she forgives him soon. That scene [back hug] I guess was one of the best scenes in the story. 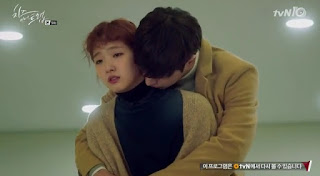 I can't compare him to In Ho because they are two different characters. It's apparent that Seol thinks more of Yoo Jung than In Ho even if she is with the latter. She feels jealous and insecure just  thinking of In Ha being Yoo Jung's girlfriend. Even though both Yoo Jung and In Ho denied the romantic relationship with regards to In Ha, Seol can't help but be bothered by the photo Young Gon sent her. Enough to make her mind wanders and be anxious even if In Ho is there besides her.

This clearly shows who she really likes to be with romantically. The one who makes her sad and troubled is definitely Yoo Jung. Complicated and hard to understand character, still there's no doubt Yoo Jung is the one. 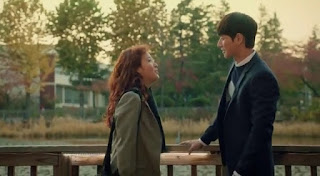 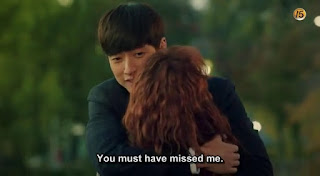 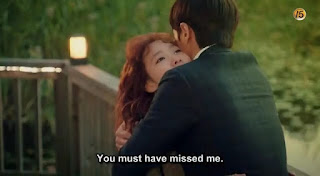 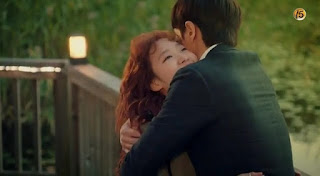 As for other characters like In Ha, I think her annoying character is somehow making it fun for viewers seeing her messing with Young Gon's life and at the same time being protective of Jae Woo. I know new misunderstanding will be created once Young Gon tell others that she is Yoo Jung's girlfriend as well. I like to see Young Gon being made a fool. His fixation to Seol is really irritating and alarming already. I guess In Ha is a match for him.

And of course when In Ha bullied Min Soo thinking she is Yoo Jung's girlfriend. I should say "poor Min Soo" but hmmm...no, I think for the annoying actions she is doing of copying Seol, this little misunderstanding is just right for her. 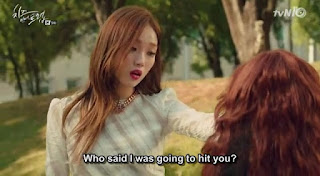 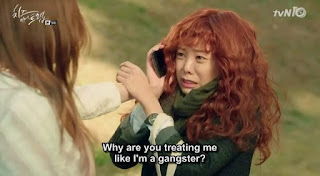 I really wish there is no love triangle because In Ho is a good friend to Seol. But then I guess the writer wants it as complex as Yoo Jung's personality. :))