(Mslee's thoughts) Queen for Seven Days - Tears for the King But Dagger for Her Husband? 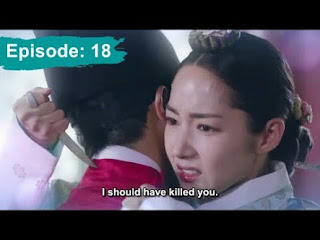 After all the pains and sacrifices and waiting... In the end Chae Gyung chose to blame Yeok for what happened to her parents. Yes she was heartbroken for their deaths but it was something that could not be helped if she really knew her father and what he was fighting for. He was so loyal to the King that he was ready to abandon her as his daughter the time they spoke to each other before she left with Yeok.

I am just sorry to see her going all out in understanding the King and his pains even though she already witnessed his cruelty first hand and how obsessed he was in killing her husband. But she could not give Yeok the same understanding when it was time for him to be the king which was his birthright given to him by his own father thru the secret letter that she also knew and even kept. Even before Yeok got to fight with his brother for the throne..she was already thinking what choice she would make. Again ...this somehow disappointed me because this showed how she was not 100% behind in supporting her husband.

I truly wondered if she loved Yeok as much as she declared? Then why question the King about the time he ordered her marriage to the prince which she thought was the King's fault why she became Yeok's wife? Was she really not intending to marry Yeok if there was no order? Well maybe... But then will she be willing to be the King's woman if she was summoned then by the King instead of marrying the prince? These were thoughts that came after watching her conversation with the King when she was buying time before the rebels came to the palace.

Was she in love with both? The writer was very vague in this subject. Chae Gyung seemingly has conflicted heart between brothers.

I feel sad for Yeok. His intension was pure and basically put his wife and mother first in whatever decisions he make. Still his wife was never satisfied and puts blame on him in the end. I guess just like her father..she wanted to be a loyal subject to the heartless King despite everything she has witnessed and suffered in his hands. She never really see the need why Yeok has to be King unlike the people around them who believe in Yeok. Even after Seo Noh died in vain Chae Gyung was able to understand the King😭😭😭

I do believe that this is the time to really say goodbye to her as the queen. When she could not support the King who is her husband but willing to kill him inspite of his loyalty and love to her. Yeah... Feel the pain of the previous King and betray your husband. Just so sad. So sad.😩😩😩

The acting was great. Lee Dong Gun was amazing. Yeon Woo Jin was equally superb. He made me cry. His gentleness as Yeok was truly heartwarming. Even in the end he was not able to physically harm his brother. His humanity is admirable. As for Park Min Young she delivered her character that is worth praising.

Finally I accepted the fate of this drama. There will be no happy moments anymore. But i am looking forward to an ending that will still make this drama hauntingly beautiful.😉