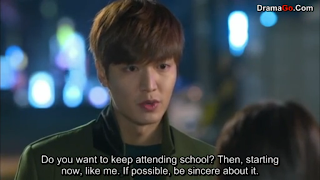 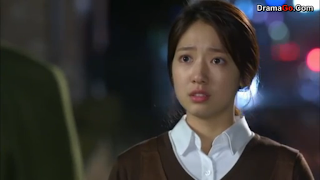 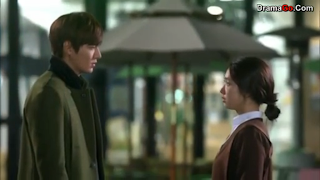 The atmosphere between Tan and Young Do keep getting intense. To add complications, Eun Sang is in the middle of it. Even though she doesn't want to, YD seemed to be lucky in finding her in places she frequents and make the most out of the situation, to her dismay. She is always nervous around him but she can't do anything about it. I pity her character. I want to smack YD face with his mocking smile. He is enjoying himself looking at Eun Sang getting nervous  by the minute. A mere look from him rattled her. Just because he found out previously that all are lies about who she is. And that makes her the next target of YD bullying.

While she tried hard to get out of his attention, to be invincible whenever, wherever, here is Tan on the side looking at her well being. But of course in a discreet way. Though he is not avoiding her, he is coming close to her in the presence of anyone who care to see, still, no one knows the relationship between them. I meant about their meeting in the US, and that she lives under the same house with Tan, her mother the housekeeper.

Lee Bo Na may be a spoiled brat, but I really like her. She always talk unpleasant towards Eun Sang but then she wasn't divulging anything about her, too. I think because she really loves Chan Young. She is just being bratty to catch attention. I love how CY can tolerate her and call her cute. Guess, they compliment each other in so many ways. I think the way he looks after Eun Sang as a friend will give protection to her somehow, I like that he can stand up against YD and his domineering presence. CY is not intimidated one bit.

I really hope Eun Sang will also find the courage to stand up against YD. Because every time she cringes from his sight makes me cringe also. I feel her whenever she is bothered, uneasy and anxious of his presence.

One of the scenes that made my heart squeeze for Tan was when Won, his hyung keeps on hurting him by saying offensive words to him and some pertaining to his mother. The way he keeps on brushing him aside is cruel. I don't want to blame him because maybe when he was young and felt alone, there's no one to console and comfort him, but I think what he has been feeling all along is unfair to Tan. He needs reassurance that whatever he has, Tan won't take that away from him. Or maybe, he needs to feel loved to embrace love from his brother. I love the way Tan keeps on seeking him and even hugging him, showing his affection as a brother. This scene brought tears to my eyes.

Anyway, there is still a lot to conquer between Tan and Eun Sang in order for them to find happiness. YD interest to her is ignited by Tan's possessiveness and protection. She is caught in between two enemies trying to defeat another. And the cause of friendship being dismantled? YD found out about his father's mistress and Tan trusting him with his secret as the mistress' son. Guess YD and his big insecurity and arrogant personality poured his anger towards Tan. A petty fight and misunderstanding between two boys.

In the end, who will win Eun Sang? Guess it's Tan. Even if she doesn't want to acknowledge her feelings for him because of how apart their economic situation are, Tan is ready to pursue her. I hope she finds bravery inside her and accept his feelings.