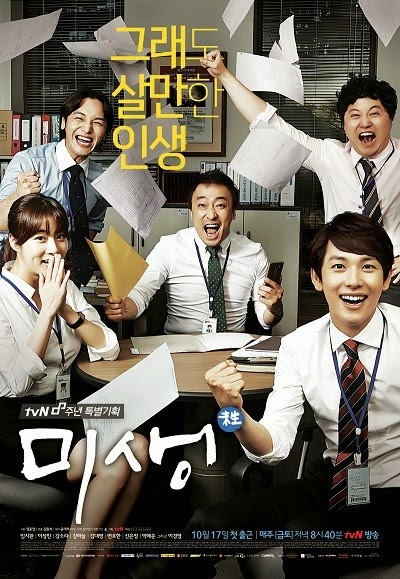 After reading a status update from one of my online chingus via Facebook where she wrote about her impression of this drama, Misaeng, I was immediately intrigued. Although I am not a fan of Im Siwan [watched him TMETS and Triangle]  and Kang So Ra [first time watching her] but already familiar with Kang Ha Nuel's works, [great acting since To The Beautiful You - Angel Eyes] I decided to take a chance and watch.

And it resulted to this drama being added to my list of currently watching dramas.

A drama that is very promising. A story of a young man’s struggle to fit in, in a world he had never stepped into. A drama that invites a viewer to connect with the character that reminds him/her of what it was like to work in a place where everything is new or unknown. A work place where competition is the name of the game.
Im Siwan has portrayed the struggles of Geu Rae in a very engrossing way.

Just short recap and more thoughts...
The story opened in a foreign country [Middle East] with Jang Geu Rae running after a man who was trying to elude him and another man he is with. Running after him in the midst of a busy street, a market place and almost cornering him at his apartment door was hard work already. But, Geu Rae never stopped, even if he was in a car accident, finding his body on top of the hood of the car after a collision. He continued to run..and run and jumped the high building to pursue.

Back in 2012...
Geu Rae did odd jobs. He was a genius in baduk, a game like chess where he uses his mind and special techniques to win over an opponent. He needed to continuously practice and concentrate on playing baduk to stay focused and at the same time continue his studies in school. But lately his concentration was being weakened because of working part time to support his family. In the end, his father passed away leaving his mother who became dependent on him. He had no other option but to stop studying and later took GED.
He is already 26 years old and no stable job and good future. His mother by connection found him a job at a company where interns who have achieved quality education, fall in line just to be a part of the company. Compared to the interns preparing for their presentations to be hired permanently, he has no knowledge of what he must do  and the scope of the work. Everyone found out how he came in and most were indignant of how easily he was accepted. No one seems to like him. No one wants to teach him. He is like a lost soul in the middle of street, just staring at the busy people answering phones, busy by the computers and chatting friendly with one another, except him.

I feel how he must be feeling. An Young Yi is a pretty intern who has skills and creativity that will surely make a place in the company. Jang Baek Ki is another one of the promising interns but there is something sneaky about his personality. He seemed nice towards Geu Rae but behind those spectacles he wore and his smiles, there is a calculating mind and somewhat duplicitous aura about him.
Geu Rae tried to fit in. He tried to do what he knows. He run errands. but his superior is another matter. Oh Sang Sik is another soul that hides a complex personality. Just watching him in this two episodes already, I find that something he sees in Geu Rae must have reminded him of something of himself from the past. I don't know but I think his cold treatment of Geu Rae just because he came in through connection made him speak harshly towards the poor kid. He does not want to give him a chance even if Geu Rae asked him to teach him. But then, even if he does not want to, he finds himself looking at Geu Rae, watching him, maybe waiting for him to make mistakes but he learned that Gue Rae is a meticulous person. Even when he gave him a USB to organize the folders inside, he saw how he arranged it. It looked too clean, but then he find fault in his work just to be mean, saying he is a lone person and it showed in his work. But Geu Rae would not stop just because of criticism. He wants to prove them wrong about him.

I also want them to eat their nasty remarks about Geu Rae.
That even though he had not graduated in college, he has the potential to learn fast and be one of the best interns and possibly worker at the company. All he needed is time to learn, to adjust and to develop his skills. As a viewer, the story already showed his skills at playing baduk which is not a common and easy game. It is a game of the minds. Each move is calculated. Each move is about winning. And Geu Rae has almost mastered the art of playing baduk. He only needed to sharpen his mind, to remember how his brain works, to use that knowledge to his advantage to learn the ways of the work  the company asks of him.

I see that Mr. Oh may finally see that potential in Geu Rae. And this journey will surely be interesting although I will have to prepare myself for further pains before I see Geu Rae achieve some recognition.

The way the story is being told is very impressive. It really connects to the viewer. The narration is sad yet full of truths that are worth pondering. The writer has shown it the way it actually is. The pains, the struggles, the anxieties, the uncertainties and how to confront inner fears are all there, staring back at me across the screens.