[mslee’s thoughts] Save Me – Final Thoughts

Got to admit, the final two episodes kept the suspense and that nail biting feeling as I watched. As the day of the wedding between Spiritual Father and Sang Mi come closer, that scary feeling continues to rise. He was so filthy with his thoughts that he was not able to hide his pleasure anticipating that hour and laugh crazily which surely made viewers felt those goosebumps. I did.

I like how the role between Sang Hwan and Dong Cheol was divided to achieve their plan. Sang Hwan did outside work while also searching for his mother who suddenly disappeared at the hospital. Dong Cheol made a deal with Sang Mi to betray him. It resulted to him being in the same place with the people who have been hidden and tortured inside one of the gruesome place in Guseonwon. Police searched a place before but failed to see these people. They were transferred to another building. But this time they were found. Thanks to the tracker in Dong Cheol’s phone Sang Hwan found him and the other two friends also followed. Dong Cheol also realized that his father was one of the tortured man inside the cell. He thought his father abandoned them. Well, the father was an alcoholic and irresponsible but still…he is Dong Cheol’s father.

Good thing that Sang Mi’s mother has fully recovered her bearings. She knew what is happening and she only pretended to be sick or drugged when there are people around her. Apostle Kang remained faithful to her beliefs but she realized that Spiritual Father is not who he is, the one who will bring her to Boat of Salvation. Her faith made her decide to abandon the people she thinks not worth or devil in disguise.

The awaited wedding took place. Sang Mi was scared and so am I while watching her being ushered inside the bedroom of the Spiritual Father. I could hardly breathe while watching Sang Mi being touched by the old man. His lust was so disgusting I was waiting when will she make her move. She had with her the syringe with the drug Apostle Kang used in her mother. But time was ticking and seems forever. Suddenly Sang Hwan was there punching the Spiritual Father. They fought and he was poked hard by a candle stick holder. Sang Hwan is much younger and stronger he defeated the old man. 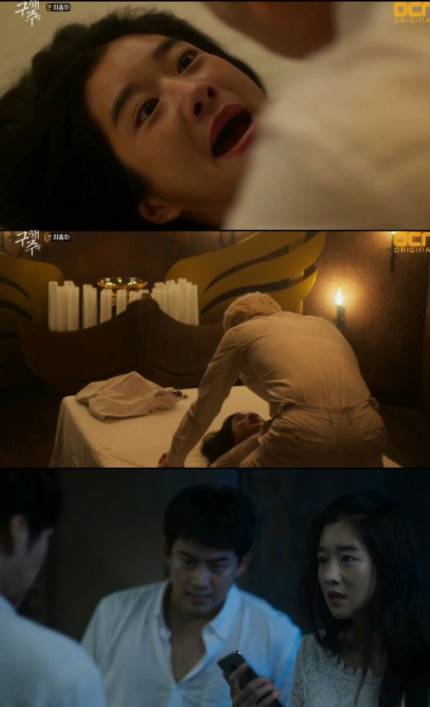 Suspense is not yet over. When the two of them needs to flee, Dong Cheol and Sang Mi’s mother came. Still inside the office of the Spiritual Father they chatted and lingered. Drama! [rolling eyes.. what the heck are you all doing there..pali..pali..GO!] Of course I was not heard [lol] and there he was, Spiritual Father got a knife [maybe a letter opener] and suddenly pulled Sang Mi as his hostage. Both had reached the prayer room where worship service held and there Apostle Kang was standing. She opened a gas container and the liquid was poured everywhere. Spiritual Father’s attention was now focused on Apostle Kang asking her what she was doing. She was going to destroy the place. Spiritual Father let go of Sang Mi to go Apostle Kang. That was the opportune moment for Sang Mi to stab him with the syringe filled with drugs to put him to sleep. He was now trying to stay conscious. Apostle Kang left them alone.

Sang Mi got the lighter and was ready to burn the old man but Sang Hwan got there in time and begged her not to do it. She would be arrested for arson and murder if she burned the place. Sang Hwan reasoned with her to let justice prevail and let the police arrest Spiritual Father. As they were talking Spiritual Father stood up but staggered towards the center where suddenly fire erupted and burned him alive. Sang Mi and Sang Hwan left together. Sang Hwan was reunited with his mother.

That was how Spiritual Father died. I felt there was rush in the final scenes of the drama. I somehow felt that it could have been more dramatic for the death of the Spiritual Father. But it was how his life ended. With all the sufferings of Sang Mi, it should be enough that he died just like that.

Apostle Jo was arrested in the end as he tried to run with the money he and his right hand [the big man] stole from the vault. There is justice after all. Sang Hwan’s father was arrested for pushing his mother down the hill. An attempt to kill her. I pity Sang Hwan, he has to divulge all this in front of press and press charges to his own father. The personal assistant who was the other woman and an ambitious woman was also arrested.

Over all, the bad guys directly involved with Sang Mi and Sang Hwan are all going to be punished. But then Guseonwon remains. Believers are still there. Their faith intact. Apostle Kang decided to make herself Spiritual Mother and continue to preach. Her goal..to be saved by Almighty she believed in with all her heart.

What about Sang Mi’s father? Just like apostle Kang he continued to believe, alone without his family.

The drama ends with Sang Hwan going to enlist. All his friends were there to see him off. Sang Mi came. That moment between them was nice to see. There was no romance, no loveline, but somehow the connection was there. I think Dong Cheol feels the same towards Sang Mi. But the story did not go there. These kids somehow found strength with each other. They formed a bond of friendship that will go a long way.

She asked to be saved.

Sang Hwan fulfilled that request. He and Dong Cheol and the other two made it happen.