mslee1107 will write some thoughts...
Translation is not accurate, again I use google translate but I think the essence of the article I have  somehow comprehend.

I know, Lee Soo Hyuk is Hong Jong Hyun's friend and "hyung". He is also going to appear in an upcoming drama Scholars Who Walk The Night. What's interesting in this interview he had today, 150512 via http://isplus.live.joins.com/ titled


is that it not only talks about his drama and Kim So Eun who is also going to be with him as cast but the photos that were inserted for the interview/article were from the clip in WGM episode 25 [if my memory serves me correct] with Hong Jong Hyun and Yura.

It was the time Yura met him with Kim Young Kwang and their stylist Kim Se Jun. The article talked about how Yura was embarrassed but laughed that moment. He also told that it was the first time he met her. 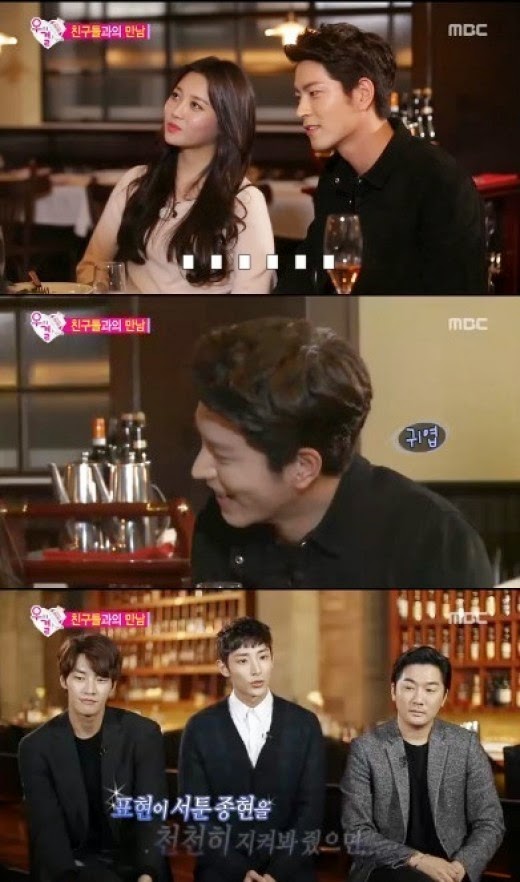 This is just a shipper's delusion.

Lee Soo Hyuk is completely different person from Hong Jong Hyun. He is a friend. He has his own career. A new drama at that. I know Hong Jong Hyun has been asked in almost all his interviews about Yura and WGM while promoting his movie with Jin Se Yeon, Clash Of The Family. Still, to see article or interview of Lee Soo Hyuk with WGM photos of Hong Jong Hyun and Yura on the same page is surprising.

Ain't media asking too many questions or writing about Yura and Hong Jong Hyun?

I guess if they can ask about them through Hong Jong Hyun's friends and and they answered then it is news worthy to be inserted in the article. I love that Lee Soo Hyuk obliged to answer question about JjongAh. And how Jjong's life has become a hot topic!

I know I have no coherent translation of the article but I think my thoughts are spot on. Well it was only a short part of the article and then it is about the drama and his role.

Anyway, I just like to think that friends of Hong Jong Hyun will be asked about WGM and Yura whenever the occasion arise. Or maybe there is something I don't know? [tongue on cheek..wink here!]

This is just random thoughts. Just happened I caught this article and saw WGM photos. For the rest of the article, of course it is about Lee Soo Hyuk and his drama with Kim So Eun Scholars Who Walk The Night.

Definitely I will be watching this.