The news is everywhere yesterday morning! Blood one true pair Goo Hye Sun and Ahn Jae Hyun are dating for a year now!  The drama aired February and finished around April 2015 so it is safe to say that the romance possibly started around the time they were filming and by the end of the drama it slowly blossomed to full romance. 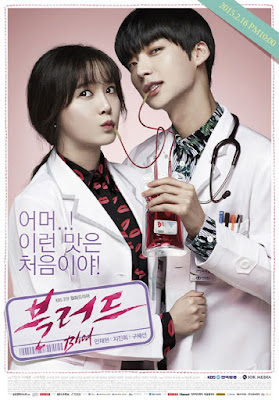 I can still remember how mesmerized I was seeing the teasers of the drama. I then made gif and posted it in my other blog at that time as a preview of Goo Hye Sun's upcoming drama.

Park Ji Sang's eyes were enthralling. Yoo Ri Ta exuded the vulnerability of someone who would soon crossed path with the unknown specie like Ji Sang, an infected human being turned vampire.

Now that both of their agencies have confirmed the relationship I am glad that Ahn Jae Hyun despite being younger by a couple of years [28] to Goo Hye Sun [31] is brave enough to announce it publicly. I like the noona/dongsaeng vibe of their relationship.

So while news are insinuating about the 3 hour kiss filming, I browsed through my blog and decided to unearth those sizzling kisses!

Perhaps it was this kiss that started it all?
Okay, my mind is running off again with imaginations.

Well, their chemistry was good even back then. Surprisingly, Ahn Jae Hyun did not look younger when he was acting along side Goo Hye Sun.

Wishing these two happiness. Fans of Blood are surely reminiscing scenes like these after hearing the good news. Even back then, there were already who wish for the couple to be real outside the drama.

Guess those wishes were granted after all!