I think this is probably what I have been waiting for in a while. Definitely, I'm in! 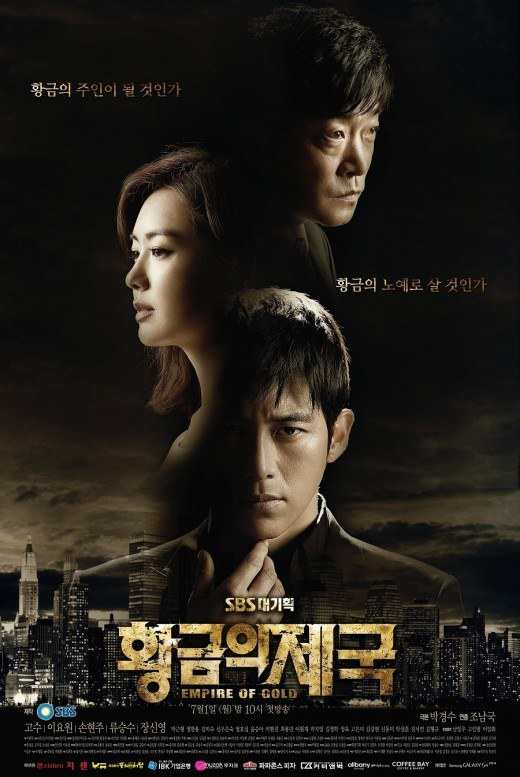 Set over a period of 20 years from the 1990's, "Golden Empire" follows a family as the family members vie for the top position.

From nothing, Jang Tae Joo built his chaebol empire and raised his little sister (Jang Hee Joo) after their father died. He falls in love with a chaebol heiress Choi Seo Yoon but her  brother, Choi Min Jae, was Jang Tae Joo biggest rival.

Ko Soo as Jang Tae Joo
Handsome, smart, tough, he’s such a perfect man. But he doesn’t have one thing : money.
It brings lot of humiliation and disgrace. He lost his father because of poverty and he doesn’t want to have the same fate. Then he joined an enterprise, Sungjin Group, and hoped to build a success story. But his job was only a guard and the future heir of the company bullied him and betrayed him. Tae Joo started to grow ambition and moved with dangerous plot.

Lee Yo Won as Choi Seo Yoon
Second daughter of Chairman Choi Dong Sung, owner of Sungjin Group. She has pride and brave.
When she was in junior high school, her father was in the list of 10 wealthiest men in South Korea. She never watched price tag whenever she bought something.
People said that Sungjin Group is a golden enterprise but Seo Yoon knew what the truth behind the gold. There was a shadow of betray, trickery, conspiracy and blood. She wanted simple life than a princess of an empire of blood.
But , when she saw her incapable brother and childish older sister, she knew that she’s the person-in-charge for the empire. While she stood against storm for her empire, she also slowly exhausted.
At that time, Tae Joo appeared. The tragedy of a princess, who loves beast, starts
.

Son Hyun Joo as Choi Min Jae
The son of the vice president of Sungjin Group, Choi Dong In. Nephew of the chairman of Sungjin Group, Choi Dong Sung.
He’s intelligent, courteous, he doesn’t easily show his emotion. He keeps both ambition-of-being emperor and smartness of hiding it.
The original son of Chairman, Won Have is more stupid that he thought. But his uncle, the Chairman, removed him (Min Jae) to protect his real son.Min Jae battles against Seo Yoon fiercely but he starts to scare when he fights against Tae Joo who joins the empire.

Jang Shin-Young as Yoon Seol Hee
Tae Joo’s senior in high school. She’s poor and wanted to be free from poverty badly.
Using her beauty, she starts real-estate consulting business. Men are her tools to reach her dream, but it changes after she meet Tae Joo again. She loves him
.