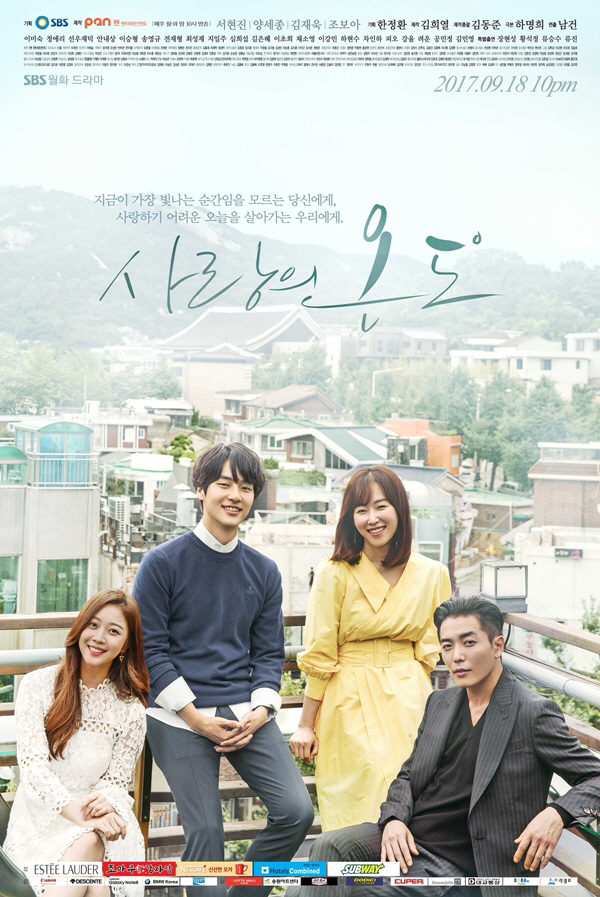 After contemplating I decided to write something about the drama Temperature of Love. Since this is a drama written by the same writer who wrote High Society [and Doctors] I was compelled to anticipate the drama with Seo Hyun Jin as lead actress on board. I was thinking that I am in for a romance within a drama which I have been longing to watch in a while. Yang Se Jong I am not familiar with and was surprised that he looks younger than Hyun Jin and he as On Jung Sun is actually a character of younger male lead. A noona-dongsaeng romance was not what I anticipated so I was skeptical in the first 2 episodes. I felt there is something missing maybe because I am looking at him in a different way, his age must have been a constant reminder. Although Seo Hyun Jin did not look her age in the story [5years apart from Sung Jun] still I thought the presence of Kim Jae Wook who is worth swoony every scene is more suitable as Park Jung Woo [CEO] to win Lee Hyun Soo’s [SHJ] heart.


But that was until episode 3 happened.


So now I am so into On Jung Sun and his adorable smiles and heart melting stares. I think he won me as a viewer rooting for him who fell in love with Hyun Soo so fast I was really in for a surprise at the turn of events in the early episodes of the drama. How he relayed his innocent feelings to a woman who thinks first and weighs option like reality versus fleeting emotional flutters of the heart is very endearing to watch. I know how Hyun Soo’s mind works. She is a struggling writer who has yet to succeed. She feels lacking in every sense despite having a loving parents and friends who supports her.
Now let me get back on Hong Ah [her one friend and who introduced Jung Sun to her together with Won Joon] later.
It feels disappointing to keep on aiming for a dream that a sunbae in the same profession, would be the one to make her feel something that she is not. And all because she has her own style when it comes to work which her sunbae does not have. Just because she asked to have a day off to feel the romance Jung Sun was offering, her a day of happiness became a memory that would make her cry and feel not worth of being an assistant writer. But then I like that there was no regret shown. At least she knew where something had gone wrong. I can’t blame her if she distanced herself from Jung Sun. For her, work and her future are her outmost priority. I think she thought love could wait. I think she thought she could handle things like romance in a light way and put more effort in finding her future. But I love how Jung Sun was always by her side and supporting her. He might be younger but he knows how to comfort her without meddling in her own personal issues. He stays on the line waiting for her to acknowledge his feelings. What she must have regretted was when she finally realized his worth and his unconditional love, he was already gone and chasing his own dreams as a future chef.


It was like, “I thought you will always be here waiting for me to decide.” But reality hits Hyun Soo that not only she has priorities, even Jung Sun has his own. Although he seemed to have listed her as his top priority but that last phone call that she denied him was a painful memory that he would carry with him. There was no closure between them. There was no beginning yet the ending was somehow bittersweet.


With CEO Park Jung Woo in the picture, I was tempted to contemplate the possibility of a romance between him and Hyun Soo in the years that Jung Sun was out of the picture. He was a stable man, a reliable employer who looks after Hyun Soo’s welfare and someone who is very kind and patient when it comes to loving her. His confession 5 years ago, after Jung Sun left for France was a moment where I thought she could have had accepted considering her reality based feelings when it comes to romance. But then, Jung Sun must have really pricked her heart the day he left, the day she did not accepted his call. The scar of that long ago fleeting romance kept her busy as a writer, now recognized with her own effort, also thanks to CEO Park who stood by her as a friend.


The reunion is a shock to her. Something that she had not anticipated, something that she had not readied herself for a face to face encounter. All her feelings rushed in that one moment. She was as stunned as he was but the awkwardness was there between them. Something about her wanted to  run away from him, wanted to blame him for leaving her, wanting to tell him she is fine and his absence was not something that affected her. But surprise, her words and his greetings were both underlined with a tinge of bitterness.


I think the writer may have written the drama in a slow pace but the memorable moments were all striking and real.


I like how the story is pondering on the love relationship between two adults who have gone their own separate ways and in time returned and met in different circumstances, both already in the road achieving their success. There could be a next chapter and dealing with past mistakes will be dealt in a mature way. But now, the writer decided to reverse the situation. Where Hyun Soo acknowledged her mistake in choosing reality over him, now he is doing the same thing. He still loves her, he knew about her feelings for him, but although he is waiting, he also like that she makes the first moves.


About Hong Ah…
I want to understand her insecurity. She may be coming from a good family with influence if she wants to use that, but she is not doing it. From the start, I thought she was a genuine friend. But then in the deepest corner of her heart, she has this envy towards Hyun Soo. She tries to hide it, tries to be normal and supportive friend, be a comfort friend, but in the end, her obsession towards Jung Sun which she thinks as love triggered all her hate and insecurities concerning Hyun Soo. Where Hyun Soo won in a contest and recognized as a writer before her was also a contributing factor to having ill feelings for Hyun Soo in secret. I hate that her positive and carefree character was indulging such negative vibes. Well, a man will always be the reason for friendship to break up. But in the story, she pursues, Jung Sun rejects. There is a clear line between them that Hyun Soo won’t be able to feel jealous if she finds out about it.


Again the reality of two friends liking the same man is something that is real and should I judge Hong Ah for this feelings? I think I can tolerate her childish acts but lying that Hyun Soo has a boyfriend to Jung Sun during the 5 years they were separated is annoying. But watching her circumstances that are all tangled up with Hyun Soo as a friend and as a writer I can somehow understand where she is coming from. Unless she clears her mind of bitterness and feelings of inferiority because Hyun Soo seems enjoying the things she herself wants to have.. she may be able to look from the outside and realized somethings are meant to be and maybe her time has not yet come. We will see how her character would be able to confront her emotions. I like her to see Won Joon who has been in love with her for the longest time. He knew her liking Jung Sun but it does not bother him. I like that he is written in a mature and likeable way.


The slow burning of romance…


In the latest episode, finally Hyun Soo uttered the words I love you as she runs towards Jung Sun. They were on a trip and found themselves alone enjoying the scenery. There was the scene where she lost her direction again just like the first time they met. In finding him desperately, she realized his meaning into her life and how important he has been to her. Those five years they were separated taught her of how her choices affected her life and how important matters slip through her in choosing what she thought is more important than happiness and fulfillment. She had a moment of success but it left her empty.


CEO Park witnessed the warm embrace and touching of their hands looking from afar from the bridge where he stood. Now he knew who was the man who put tears on her eyes years ago. Now he understood who was the man who he could not walk passed through to get her attention. Now he knew… it was Jung Sun. The man he likes as a brother.


How will the next episode unfold?
Temperature of love is slowly building the fire of romance between Jung Sun and Hyun Soo. How their flame of love affects the one man who stood by their sides through thick and thin will be the twist of the drama.